Lately I have been thinking a lot about the following questions:

What would you do if you didn’t have to do it perfectly?

If you dared to be a beginner, what would you try?

What’s something you would never try but sounds like fun?

I read those questions in A Book That Takes Its Time: An Unhurried Adventure in Creative Mindfulness, (love this book!) but they originally appeared in the Artist’s Way by Julia Cameron. (haven’t read this book, but have always meant to!)

I especially love the first question because I am a perfectionist, which for me translates into either not finishing or not even attempting a lot of things. If I never finish something, it will never be done incorrectly or fall short of what my vision of it was. If I never attempt it, I can never fail. It’s a foolproof method except it keeps me from doing a lot of the things I really want to do, like host dinner parties, finish my novel, write this blog, landscape my yard, etc.

It’s frustrating because a lot of what’s most important to me, a lot of what’s on my life list, is stuff I’m afraid to fully pursue because I’m afraid If I really go after it, I’ll just mess it up. So it keeps me stuck in this loop of wanting to do something that I ultimately don’t do because I am afraid to fail. Very annoying.

So, how do I get off this self-defeating merry-go-round and actually make some progress towards my goals?

This is going to seem like a weird transition, but stay with me. Have you seen the new Netflix show “Nailed It!”? My kids and I have been cry-laughing over this show. On “Nailed It!” inexperienced but enthusiastic bakers attempt to make impossibly difficult cakes and cookies with hilarious results. Here’s a description of a scene from the show from a recent New Yorker article:

“I don’t mean to laugh, but your princess is terrifying,” Byer says to a contestant named Toni. She’s doubled over in laughter in front of the final reveal: a collapsed phallus of a castle tower made of underbaked vanilla cake coated in liver-beige frosting. The princess is demonic: a disembodied ball of fondant perched on one of the layers, with giant, staring white eyes, two snakelike nostrils poked in with a toothpick, and long blond hair that snakes down the buttercream walls like lumpy, overlong Cheetos.” 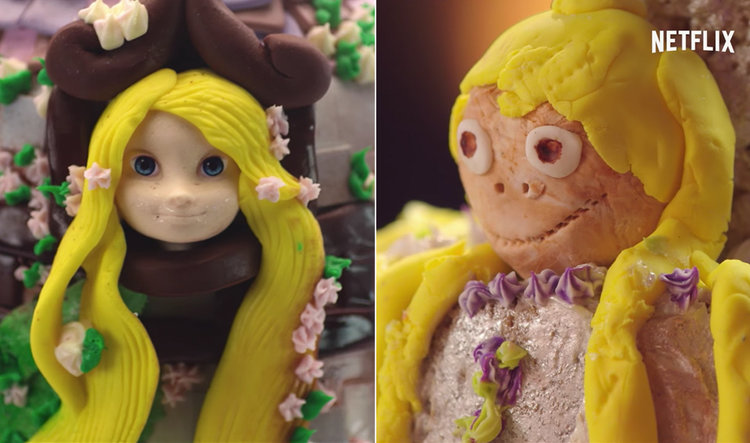 There is something about the earnestness of the contestants trying to make these incredibly challenging cakes that just cracks us up and brings us pure JOY. It is so refreshing to see other people struggle and NOT accomplish what they set out to do, but have the ability to genuinely laugh about it right along with the audience.

I wish I could bring the Nailed It! attitude to accomplishing my goals. This, I think, would be the antidote to my perfectionism.

After all, the stakes are only as big as they are in my head. I think my perfectionist brain lies to me and tells me the stakes are enormous, that everything depends upon the outcome of whatever it is I attempt to do, whether it be writing a book or having people over for dinner. When really it’s about the process. I like the process of writing. I like the process of cooking and being hospitable. Doing these things makes me happy and helps me feel connected to other people. Why am I denying myself the pleasure of doing something that makes me happy?

I’ll tell you why. Because perfectionism is whispering in my ear, telling me it could be a disaster. It could be humiliating. Some dinner guest might wander into the wrong room and see that we actually live like a pack of animals, and the rest of the house was just cleaned up for the benefit of outsiders. My toilet might overflow and send a river of toilet water down the stairs (this actually happened at an office Christmas party I hosted. Still trying to laugh about it.) The food could be terrible and we’d have to order takeout. The book could get a bad review and it would make me cry. My blog might be trolled by Donald Trump. “There are so many things that could go wrong! Better not to try at all,” perfectionism warns.

And I totally believe all of this. This all sounds very plausible and like solid advice. So I don’t do the things that scare me. And everything stays very safe, and for the most part nothing bad happens because I haven’t risked anything.

But then again nothing happens.

And the thing is I want stuff to happen. I want to accomplish the goals that have been on my New Years Resolution lists for the past decade. I’m forty-something now. One day I will be really mad at myself if I don’t do some of the stuff I always meant to do. And there’s no telling when that one day will be. It could be a long time from now or it could be sooner.

Perfectionism has literally gotten me nowhere. It’s time to listen to a different voice.

It’s all about the story you tell yourself. I have been telling myself a pretty intense story. My current story is like Mission Impossible, where everything depends on me and the stakes are very high and I’d better not mess it up or else the whole world could blow up. The Nailed It! story is way on the other end of the spectrum. Nothing is at stake. Maybe you could win $10,000 if you are the winner, but that’s like a bonus. Nothing bad will happen if you are not the winner. And either way you will have had a blast and probably spent some time doubled over in laughter. So why not give it a shot?

If I could just scooch my story a little further towards the Nailed It! side of the spectrum and away from Mission Impossible, I think I would be much happier and get a lot more accomplished. So that’s my new goal.

Back to the original question I’ve been pondering: What would you do if you didn’t have to do it perfectly?

The answer is anything I want. Everything. Because nothing is ever going to be perfect and that’s ok. It’s not just ok, it’s wonderful! It’s such a relief. It’s the kind of news that makes me want to cry happy tears.

What’s the story you tell yourself? Do you struggle with perfectionism? What would you do if you didn’t have to do it perfectly? I’d love to hear.